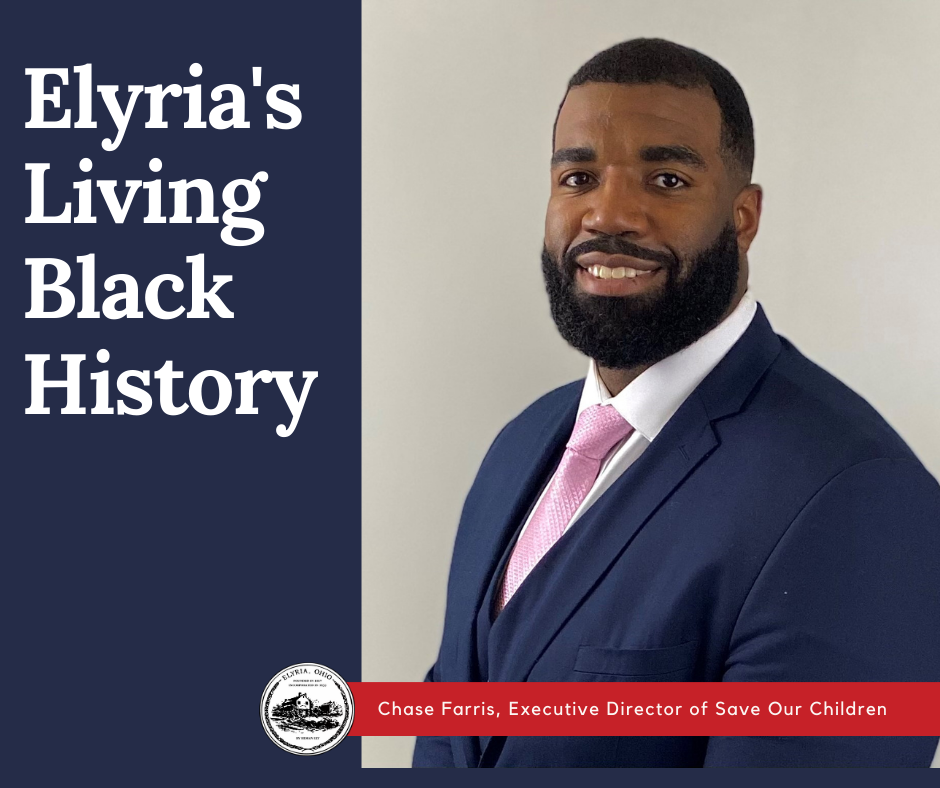 1. What does being a living example of Black history mean to you?

If you would have told me at 17, this would be in my 10-year plan, I wouldn’t have believed it. It’s a blessing and an honor to impact people and effect change – especially in my current role. At the same time, though, it’s a major responsibility. I owe it to the people who paved the way for me, to pull up the cement truck, and pave the way for someone else —  I can’t get my rewards and just run…I have to come back, do the hard work, and start paving a way.

2. If you could tell Elyria teens one thing, what would it be?

Your life is made up of a series of defining events that shape your pathway. For kids in Elyria, it’s important to know that no matter your experiences or where you come from, that you shouldn’t use it as an excuse for where you want to be. There are a lot of people here supporting you, there are resources, there’s help. You just have to ask. Seek help. You can only get so far on your own.

3. Who is your Black History Hero?

My grandfather, Charles Farris II is my Black History Hero. Growing up, hearing the stories from my mom and grandmother about him waking up in the morning to a house full of kids and one car…he would walk, daily – from the west side of Elyria to the Foundry, leaving the car so my grandma could do what she needed to do for their five children. As African-American men – we’re providers. We have to make sure our people are taken care of, so that’s what I do: what I can to take care of my family.

Chase Farris is the true definition of a born and bred Elyria Pioneer. Growing up on the City’s westside, Chase attended Oakwood Elementary and Westwood Junior High, where his football career arguably began after a tough first practice of barely making a lap around the field. “The coach, Mr. Hoch,” he began, “just looked at me and said — don’t quit. Just come back tomorrow.” shared Chase.

“You can only get so far on your own. It takes a village to raise a child, and I firmly believe I had my village. From my mom, to Coaches Hoch and Hamilton, to others.” shared Farris.

Chase went on to play for Elyria High School, and graduated in 2011. After a successful high school football career, Chase attended Ohio State University, where he played for the Buckeyes football program beginning in 2012. “I had a bit of a culture shock,” said Chase “I was exposed to different people and cultures, teammates from across the country, and being at a university that massive — the same size as the entire City I grew up in.”

Throughout his time there, Chase, known for working hard and being a selfless team player, transitioned from defensive to offensive line. In 2014 during his junior year, his recruiting class led the Buckeyes to the first-ever College Football Playoff National Championship victory.

While at Ohio State University, Chase majored in Consumer and Family Financial Services, earning his Bachelor of Science in 2015.

After graduation, Chase went on to play for the Detroit Lions following the conclusion of the 2016 NFL Draft before being cut. Chase, thinking back to his conversation with Coach Hoch at Westwood, never gave up, spending two weeks practicing nonstop. After a few unfruitful calls and practices, Chase received word from the New England Patriots that they were interested, and was signed within two days.

“The Ohio State and New England programs had a lot of similarities,” said Farris. “Competitive excellence, everyone worked hard and did their job. I was right at home.”

On top of beginning a career in the NFL, Chase simultaneously continued his education at The Ohio State University. “Fortunately for me,” Chase said “my instructors were more than willing to work with me [as a student also in the NFL.”

In 2017, the New England Patriots, with the help of Farris, won Super Bowl LI against the Atlanta Falcons 34-28 in overtime. By Fall, Chase was a national and world champion who earned a Master of Science in Kinesiology and Sports Management.

After the culmination of extraordinary life experiences, Chase returned home to Elyria to give back, “If I can come back here and pass along what I’ve learned to people and help them get further ahead than I was, how could I not? How could I not do that in my community?” he shared.

Chase currently serves as the Executive Director of Save Our Children, leading the organization through implementing and actualizing its mission of changing lives by improving literacy, cultivating leadership skills through mentoring, and promoting academic excellence among the at-risk youth in our community.