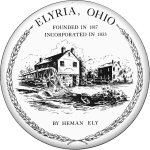 Elyria Mayor Frank Whitfield and the city’s engineering department gathered this week at a town hall meeting to preview upcoming infrastructure projects. The meeting aimed to educate the public about the planned resurfacing projects on East Broad and Cleveland streets through 2024. The town hall format gave residents an opportunity to learn more about these city improvements and ask questions.

Mayor Whitfield discussed the importance of investing in Elyria’s roadways to give residents safer, more comfortable commutes and to enhance the experience of visitors. Broad street, he said, is of particular importance as it is a gateway to the city’s downtown assets, including the $36 million E-sports hub, office space, and restaurant planned for the Dixon and Robinson buildings known as Forge 417. “And that’s a big driver of why we want to have these amazing arrivals so that people get a feel when they’re coming to Elyria that this city has got it together, that I’m arriving at something special,” he said.

According to city engineer John Schneider, $13.6 million in federal funding has already been secured and the project completion is slated for 2024.

Mayor Whitfield also noted the importance of the city being responsive to the business community. “We have a major employer who has expressed concerns about Broad Street and would like to see improvements there, so we want to be expeditious. We want to respond,” he said.

The engineering department will host meetings with residents and businesses in the project area to give further details and answer questions. You can watch a recording of the infrastructure town hall here, and view the PowerPoint presentation here.